Posted on February 7, 2015 by JovialGnome

My apologies, I should have posted the answers before, I was going to lats night but then I thought no, I’ll do it all tomorrow which is now today!

and it is b) Minerva McGonagall who also appeared on Janathon 10th and who has reared three sets of twins without ever being an ounce of trouble. I tend to think of her as the matriarch but in actual fact, she is the youngest of the five sheeps that I originally started with. Just one person guessed correctly so congratulations go to loupie!

This young lady graced the blog on Janathon 30th 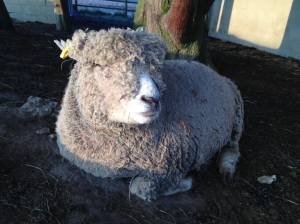 and she is c) Fleur Delacour who was guess the sheep on Janathon 5th and who is mother of the extremely cute Ginny Weasley. Once again just the one correct guess and once again it was loupie! 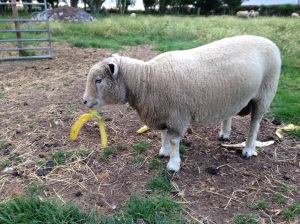 b) Nymphadora Tonks appearing as guess the sheep for the third time, her previous appearances being on 13th and 20th Janathon. Yet again just the one correct guess but this time it was winsometahn, well done!

I hereby declare rundmach the winner – very well done – so pleased a Harry Potter fan won! It’s funny but like I said in my final blog, up until recently I hadn’t read any of the other blogs and had a picture in my mind of ‘rundmach’ being a German gentleman – just shows you how wrong you can be – Canadian female, not even close! Sadly Canada is just a little too far for me to bring your prize of two of the boy sheeps, I will however look for something a little more ‘mailable’ and when I’ve found it I’ll be in touch again!

Thanks to you all for taking the time and trouble to read the blog and play along with guess the sheep. As you all know, words cannot express how much I love my “teddy-bear” sheep but it has been a joy and a pleasure to share them with you and if you care to visit Mirkwood Ryelands facebook page you will see every photo of these wonderful sheeps that I’ve ever taken!

Thanks again, it’s been fun, see you next year!

An occasional blog about sheep and parkrun...... let's face it, what else is there! 😃
View all posts by JovialGnome →
This entry was posted in Janathon, My Animals. Bookmark the permalink.